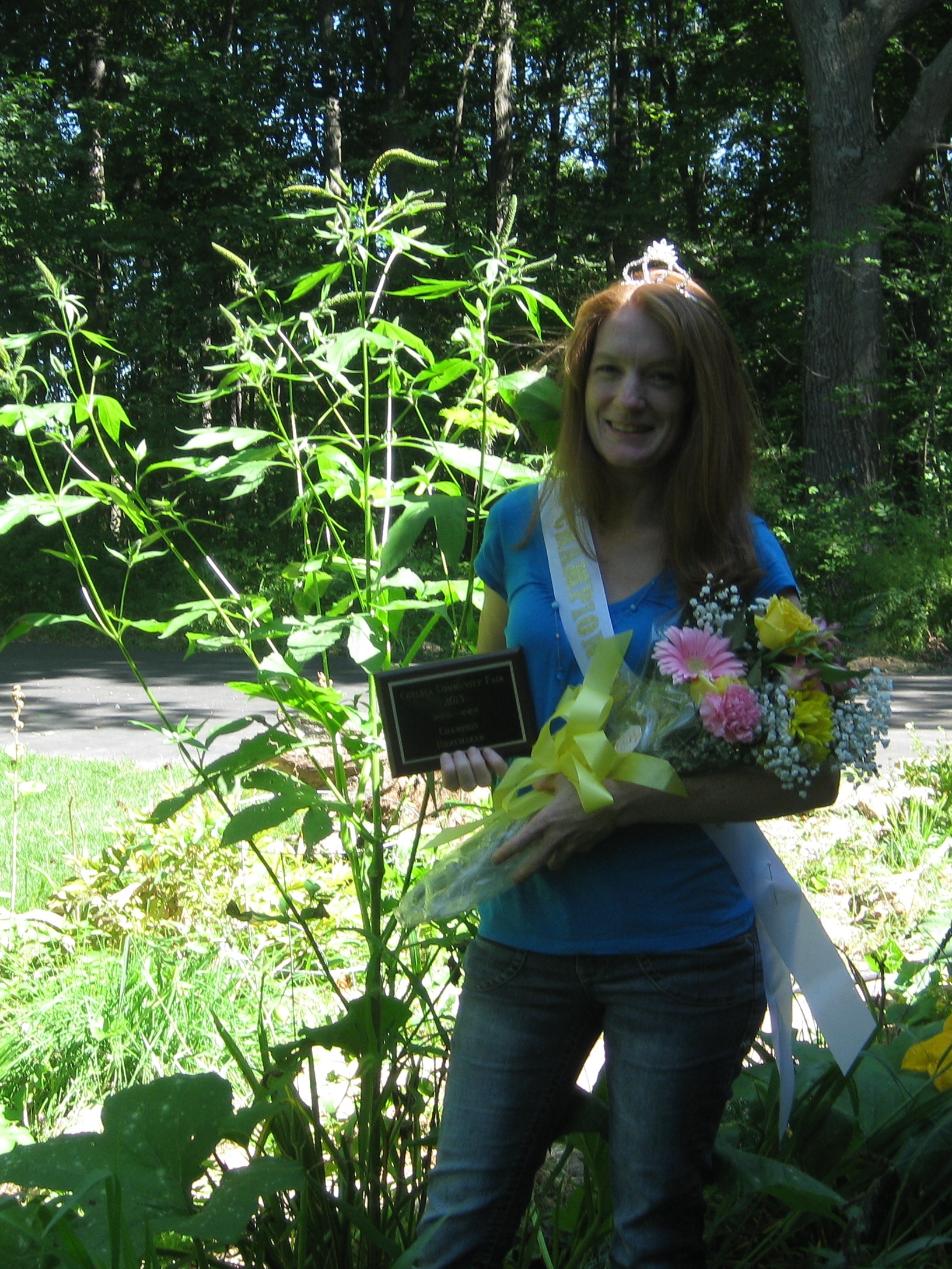 Last week I won the Chelsea Homemaker of the Year Award at the Chelsea Fair.  Now, anyone who knows me well knows that public recognition embarrasses the bejeebers out of me.  I hid with a scarlet face behind Baby J, while they bedecked me in a sash and crown and gave me flowers and a plaque.  Then, I was careful not to tell anyone and grateful that no one I knew was at the ceremony.  This worked well until my husband absconded with my computer and Kindle, updated my Facebook status, and refused to return my electronics until he somehow made it so that I can’t delete it.  I will now be changing my password to Mattisarat and putting my icy feet on his belly in the middle of the night for the remainder of his life (which may be short.)

Soon after I got the phone call to be sure I was at the award ceremony, I walked into the girls’ room and stepped SPLAT! into something cold and squishy, yet curiously crunchy.  On opening the window shade I found that my usually well behaved three year old had made a fish pond in the middle of her bedroom carpet with water and goldfish crackers.  I hopped off to the bathroom on my heels, navigating around laundry piles to rinse my foot.  The irony was not lost on me as I, potentially homemaker of the year, scrubbed wet cheese crackers out of the cream colored carpet.  Used to such things, the kids didn’t even ask what the maniacal laughter was all about.

As I went through my day I noticed that one of the weeds in the garden by the front door was taller than me.  The three year old (of fish pond fame) had decorated her face with a Sharpie and looked like a cross between Hitler and Edward Teach.  Someone had used a thumbtack to stab decorative designs in the bathroom wall.  There seemed to be something growing on the table behind the fish tank, and the chinchilla had chewed huge gouges in the window sill behind his cage.  I was wearing socks that said Monday, when it was clearly Wednesday, or was it Thursday?  If I was going to wear the wrong socks, why did I pick Monday?  (I guess Monday would be a more formidable barrier between my feet and wet sticky goldfish than, say, Saturday.)  Glancing in the mirror I saw I hadn’t brushed my hair yet and yesterday’s mascara was giving me a raccoony quality that might lead to the dogs trying to chase me up a tree.   Homemaker of the year? I thought, starting to giggle again.  It was a good thing the judges for the fair didn’t make house calls.

I found the whole episode a good reminder that everyone has a certain face they allow to be seen.  We post about our anniversary and our wonderful spouse, homeschooling and our perfect children, the vacations we take and the friends we were with, giving the impression of a perfect life.  It’s important to remember that the face a person chooses to show in public is not the full picture.  Everyone suffers and has trials; it’s how God grows us.

As I stood at the fair looking at the blue ribbon beside a picture I had entered of baby Jenn, I thought again how it’s so easy to tell half the story.  The judges, the people passing by see a blue eyed beauty, never dreaming of the pain and loss that go with the picture.  I looked over at the dress I made that won grand champion and thought that it didn't tell the full story of dinners going uncooked and dishes undone while I sewed all those tiny beads on by hand.

And, you know? I think it’s fine that people often share only the positive, maybe even preferable.  Can you imagine if you looked at your feed and saw: “Had a huge fight with my husband this morning; why did I ever marry that jerk!” “My teenager just got arrested for public indecency; Anyone know a good lawyer?” “I gained fifteen pounds on vacation; check out this picture of my belly rolls!”?  People would be clicking “like” a lot less often.  I just think it is important to remember that we are getting the edited version and not assume that someone else is a better person or has an easier and happier life than we do.  Inside the shoes of the person receiving that Champion Homemaker plaque may be wet cracker covered socks that say Monday.