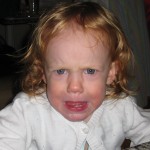 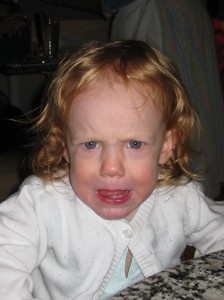 I stepped into the story room at the Chelsea Library as a plastic banana came sailing out of the playhouse.  It was quickly followed by a second banana, an apple and some ice cream.  Looking the culprits firmly in the eye, I said, “We do not throw things in the library!”  Appearing mildly, chastened the two children stopped lobbing toy food across the room.

What makes the incident noteworthy is that these children, perhaps five and eight years old, belonged to someone else, someone who didn’t deem it necessary to keep tabs on her own children in a public place.  Soon after, the younger child began yelling at Elena, my one year old, telling her that babies were not allowed in the playhouse and violently assisting Elena to the door.  I quickly intervened, rescued my baby, and told the five year old, “We do not yell at babies or hurt them!”

Unfortunately, these minor encounters are not as infrequent as we might prefer.  It seems the need to correct other people’s children presents itself somewhat often, bringing with it concerns as to what is appropriate and what is not.  Each parent has their own level of expectation for their children and a personal method for dealing with misbehavior.  It’s difficult to know when your interference is warranted and when to keep your nose out of things.

I, for one, have no qualms correcting the child of a parent who is not present, if their behavior is universally unacceptable.  A nose picker can be ignored, a biter cannot.  I didn’t always feel this way, but the longer I’ve parented, the more I’ve come to realize that we’re doing no one a favor when we overlook bad behavior.  I try to speak with both kindness and firmness.  I do not ever touch a child to stop a behavior unless someone (the child included) is in immediate danger.  For example, the toddler about to walk off the edge of playground equipment or the two year old pinching another child would need a physical intervention if words don’t do the trick.

It is a more challenging situation if the parent is present and you feel the child needs correction.  Personally, I hate it when people correct my children when I’m standing right there.  The librarian who told my then two year old that he needed to stop crying or he’d need to leave the library, would have done better discuss the disturbance directly with me. The swim teacher who tells my thirteen year old to sit in time out, because she doesn’t like a certain behavior that I have no problem with, isn’t earning any appreciation from me or my son for her interference.  (Though, it does give us a good chance to discuss respect for authority.)

So, my first response when a child misbehaves with the parent right there is to wait to see if the parent is going to do anything.  If the parent doesn’t act and the child is really acting out, I bring the matter to the parent’s attention.  Last week at the library a small child was grabbing toys from Elena, hitting her over the head with them, and pushing her over.  After attempts to shield her, I had to pick her up and ask the grandmother of the offender to please keep her grandson from assaulting my daughter.  The woman, highly embarrassed, explained that he wasn’t used to sharing, but was much more attentive after that.

With gray areas of bad behavior, this is more difficult.  For example, a child swearing on the playground, while Daddy has a cigarette on the bench within easy earshot, isn’t really endangering anyone, just annoying everyone.  In this circumstance, I am a lot more likely to call my own children to me, acknowledge the unwanted behavior, state my expectations for their behavior, and leave it at that.  In any situation, I find it helpful to pray for a little wisdom and kindness before taking action.  An angry attack will bring on a hasty defense, but rarely the desired change in behavior.