Taking Soap Beyond the Bathtub 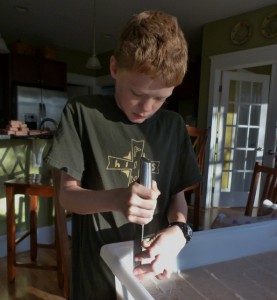 How does one mom who already has more than enough to do suddenly end up in the business of making soap for charity?  Especially, when she never made a bar of soap in her life before this past October?  Well, it was a slippery (pun intended) slope, let me tell you.

As so many things do, it all started on youtube.  In an effort to raise our awareness of those living in third world countries, one morning, during family devotions, I cued up a few videos showing the struggles of many Africans to obtain sufficient water and that, even then, the water is filthy and contaminated.

This touched my children’s hearts and led to my eleven year old’s comment, “Mom, how about we cancel our trip to Disney World in April and use the money to buy a well for an African village?”  (This, of course, warmed my mommy heart, brought tears to my eyes, and made me think that maybe there was some hope for my kids turning out well after all.)  Well, Grandma was paying for that trip, so that wasn’t really an option, but the discussion had begun: How could we help with this problem in Africa? And, more specifically, how could we raise the $2600 needed to provide just one well to an African village?

Ideas abounded from giving up all of our Christmas presents to Mommy and Daddy paying for it.  Then the suggestion was made:  Why not sell soap?  We had made our first batch the previous week as a science project, so it was fresh on their minds.  Soap costs about a dollar a bar to make.  If we sold it for just three dollars a bar, we could sell 1300 bars and have enough to pay for a well.

And so the kids and I committed to making and selling 1300 bars of soap to raise the funds for a well for an African village, an idea easier said than done.  The first thing to do was to recruit some help.  My kids are blessed with nineteen cousins (so far) and twenty two aunts and uncles.  It was easy to decide who to go to for that help.  So, the family came together offering help with packaging, videos, soap making and sales.  They took it a step further as they began to brainstorm other ways to help raise funds.

But, the day to day making soap day in and day out has fallen largely to me.  Since, soap making involves lye, a caustic substance that is converted to glycerin through the process of saponification, I can’t just let the kids go off and make soap while I eat bon bons in front of the television.  For the last few weeks I have lived, breathed, slept and even (inadvertently) eaten soap. The kitchen is covered in soap.  The pantry is full of soap ingredients.  The den has mountains of finished bars.  And, we’re only at about 400!

A little over a month ago my brother-in-law Greg prophesied during the church service.  I felt the words were meant specifically for me.  He ended by saying that an opportunity would come up in the next few weeks and to go ahead and say yes.  I feel that the soap making is a direct answer to that.  I never would have thought that God would have me making soap for the kingdom, yet here I am and my relationship with him is growing throughout the experience.