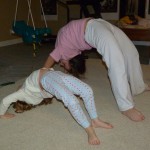 Having  informed my kids earlier in the day that they were giving up screen time for lent, I found myself in a bit of a conundrum with my husband on a business trip, five bored kids, and myself ready for a yoga workout.  So, I offered the kids the choice of doing yoga with Mommy or cleaning the basement.  Oddly enough, yoga won out and we were soon pushing the coffee table out of the den to allow a vast 6' by 10' space for the six of us to twist ourselves into various yoga poses. 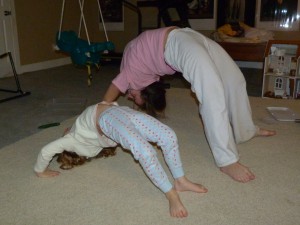 Fortunately, no one seemed to realize that the yoga DVD should constitute screen time, and the questions never arose as to why yoga was allowed while Mario Cart was not.  I instructed them to change into stretchy pants, which was followed by ten minutes of debating if jeans were or were not stretchy.  We ended up with two boys in wind-pants, one in sweats, and Katie (3) and me in yoga pants, which she rocked in a way to which I could never aspire.

Two minutes in Jimmy (11) informed me that the DVD would be better named Yoga for Stress, as opposed to the true title, Yoga for Evening Stress Release.   He then did the chair pose by actually sitting in a chair and somehow turned scale pose into something resembling a bicycle.  Sean (12) twisted his shirt into several convoluted knots and told me that it now resembled the scanty tops of the women on the video.  (Glad Daddy missed that one.)  All the while Joey (8) very calmly folded himself into pose after pose, seemingly oblivious to the brother butting him over and the little sister bouncing on his back.   The entire epidsode was accentuated by a smattering of soft toots which resulted from having fed them chili for dinner.

Katie and Elena took my being on the ground as an invitation to cuddles and lap-time, resulting in my getting into poses never before dreamed of by a yoga instructor, what with Katie clinging to my back and Elena to my neck and all.  The girls found the lunge pose particularly enjoyable, crawling through the tunnels created by our legs, which caused a domino effect that they found pleasing.  At which point Elena, taking advantage of the proximity of my chest would toddle over for an attempted nursing session.  Sadly, our yoga time came to an early close with Elena going into her own version of "down dog" -butt in the air, forehead on the floor, wailing over the lack of milk issuing from my t-shirt.

I'll be writing to the Yoga Zone producers to let them know that, while we enjoyed, Yoga for Evening Stress Release and Yoga for Flexibility, we'd especially like to see, Yoga with a baby attached to your breast, Yoga with a Child Grasping Each Ankle, and of course, Yoga with Tween Boys who Would Rather Shoot the Yoga Instructor With a Sling Shot Than Relax into Corpse Pose.  However, Until they get those DVD's out, I am eagerly looking forward to my ballroom dancing DVDs coming in at the library.